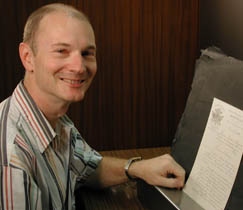 Jesse Eschbach is the past chair of the division of keyboard studies for the College of Music and has served as a faculty member since 1986. Eschbach holds a doctorate of musical arts degree from the University of Michigan where he was a student of Robert Glasgow. His bachelor's and master's degrees are from Indiana University where he was a student of Oswald Ragatz. Eschbach studied early French music and the works of Jehan Alain in the class of Marie-Claire Alain at the Conservatoire de Rueil-Malmaison. During this time, he was awarded the Prix d'Excellence and the Prix de Virtuosité by unanimous jury. Upon completion of his doctorate, Eschbach returned to France to accept the post of organist and choirmaster at St. Michael's English Church in Paris. While there, he studied organ with Marie-Madeleine Duruflé and piano with Christiane Devos.

He has appeared as a recitalist and lecturer throughout Europe and the United States. His recording of Franck and Guilmant was released on the Centaur label. With the organbuilder Gene Bedient, he co-founded the Summer Institute for French Organ Studies which meets for two weeks each summer in Souvigny and Lyon, France.