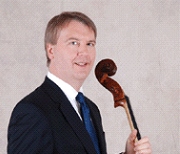 Allen Whear is associate principal cellist of Tafelmusik Baroque Orchestra and artistic director of Pro Musica Rara, Baltimore, Maryland's premier early music ensemble. He is principal cellist and recital director of the Carmel Bach Festival in California. A graduate of the New England Conservatory and the Juilliard School, he was the recipient of an ITT International Fellowship and studied with Anner Bylsma in Amsterdam. Whear holds a doctorate from Rutgers University. He has performed as soloist with Tafelmusik, and the Brandenburg Collegiums, Philadelphia Classical Symphony, Mid-Atlantic Chamber Orchestra, and Charleston Symphony. He has appeared with Musica Antiqua Köln, and the Vienna Boys Choir, Concert Royal, Mozartean Players, Smithsonian Chamber Players, Aradia, the Maggio Musicale in Florence, and toured Japan and Singapore as principal cellist with Opera Atelier. He is active as a lecturer and a prolific writer of program notes. His liner notes for Mozart and Beethoven symphonies have been published on the Sony and Analekta labels. His recording credits include Sony, Virgin, Musical Heritage, Naxos, and Deutsche Harmonia Mundi.