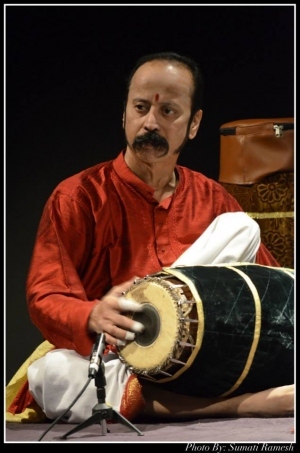 Poovalur Sriji, a prolific composer, performer, educator, ‘A’ Top grade artist recognized by All India Radio (the Indian government through their radio network grades artists and “A” Top is the highest ranking), studied South Indian classical music from his father P. A. Venkataraman. For over four decades Poovalur has performed with leading artists from both South and North Indian classical traditions. Since his move to the United States he has performed and recorded with Sir Yehudi Menuhin, Béla Fleck, Mark O’Connor, John Bergamo, and Glen Velez to name a few. Poovalur has composed several pieces portraying the South Indian idioms. He has received several awards from leading institutions, and the album Tabula Rasa, on which he composed and performed with Béla Fleck, V. M. Bhatt and J. P. Chen, was nominated for a Grammy. He is the founding member of the group Brahmah. He also founded and directed the SNEW and South Indian Cross- Cultural Ensemble at California Institute of the Arts (1990-1998). Prior to that he taught at San Diego State University (1986-1990). Currently at the University of North Texas, Sriji teaches mridangam and directs the multi-cultural ensemble The Bridge.