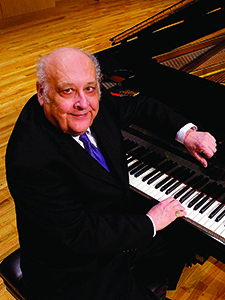 Joseph Banowetz has been described by Fanfare Record Review (U.S.) as "a giant among keyboard artists of our time," by Russia's News (Moscow) as "a magnificent virtuoso, who amazed the public by his deep understanding of the composer's spirit," and by Ruch Muzyczny (Warsaw) as "a virtuoso in the noblest sense of the word." A graduate with a first prize from the Vienna Akademie für Musik und Darstellende Kunst, his teachers have included Carl Friedberg (a pupil of Clara Schumann) and György Sándor (a pupil of Béla Bartók). Banowetz has been heard as recitalist and orchestral soloist on five continents, with performances in recent seasons with such orchestras as the St. Petersburg (formerly Leningrad) Philharmonic, Moscow State Symphony, Prague and Bratislava Radio Orchestras, Budapest Symphony, New Zealand Symphony (on a twelve-concert national tour), Beijing Central Philharmonic, Barcelona Concert Society Orchestra, Hong Kong Philharmonic, and Shanghai Symphony.