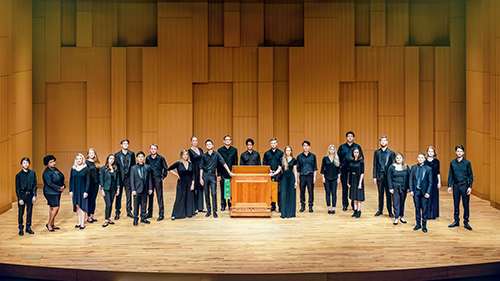 Vox Aquilae is an ensemble of 18-24 singers who specialize in the performance of music from the 16th through the 18th centuries and which usually performs with the University of North Texas Baroque Orchestra.

The choir consists of members of the other student choirs, plus graduate students in voice or early music. The repertoire is extensive. In 2011, 2013, and 2015 Vox Aquilae, along with the Baroque Orchestra, were invited to perform at the Boston Early Music Festival, the premiere such festival in the world. In June 2012, 14 members of Vox Aquilae were invited to perform the Victoria Requiem at the Berkeley Early Music Festival--that performance, recorded live, can be found here.

Their performance from December of 2011 of the Vivaldi Gloria on YouTube has had more than 1,500,000 hits.

The choir, formerly known as the Collegium Singers, also performed at the National Collegiate Choral Organization convention in Portland, OR in November 2015.