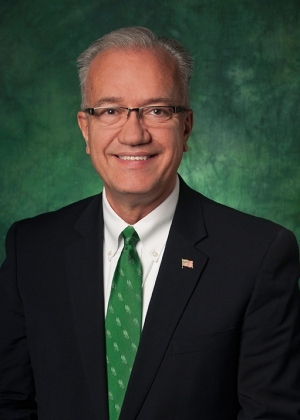 Dean of the College of Music

During Dean Richmond’s tenure at UNT, the College of Music has (1) launched a college-wide strategic planning initiative, including a series of college-wide faculty/staff retreats, (2) reversed 6 years of steady enrollment declines, increasing the College enrollment by 9 percent, (3) secured funding and completed a facilities-programming project for a renovation and expansion of the UNT music facilities, utilizing the team of BRW, HGA, and Kirkegaard Associates, (4) secured $6.7M in facilities funding to renovate the Courtyard, Choir Room, Recital Hall, and Merrill Ellis Intermedia Theater, (5) completed 27 music faculty searches, (6) completed 9 staff searches, (7) secured approval and deployed the “Accept’d” CRM platform for all College of Music camp/workshop/college applications and registrations, (8) launched a new artistic/scholarly initiative with institutions and artists in Austria, China, The Czech Republic, Germany, and Thailand, (9) funded a new music-business-plan writing competition in the Music Entrepreneurship Program, (10) secured approval and funding from the UNT Office of Research and Innovation for a college-wide faculty development initiative to pair as mentors UNT Guggenheim Fellows in music with UNT music faculty currently seeking Guggenheim fellowships, (11) launched a Composer Residency for film/TV composer Bruce Broughton, (12) secured a naming gift for the renovation of the College Dean’s Suite, (13) secured support from the VP of Enrollment to fund 4 full-tuition undergraduate string quartets in the College of Music, (14) provided funding for a new, graduate woodwind quintet, (15) launched the first-ever PhD in Music with a concentration in Performing Arts Health, (16) worked in partnership with UNT's residential high-school Texas Academy of Math and Science (TAMS) to create a new music track within it, and (17) in partnership with UNT System, completed a transition audit of all COM financial affairs. Since August 2016, the UNT College of Music endowment in the UNT Foundation has grown by 40 percent to over $27 million. For a summary of current rankings for the UNT College of Music, please see https://www.unt.edu/rankings/college-music.

During his tenure at UNL, Richmond guided the Glenn Korff School of Music (GKSOM) in the development of a strategic plan, the successful application for re-accreditation to the National Association of Schools of Music (NASM), the successful application for initial accreditation to the National Association of Schools of Dance, the creation of new MM and DMA degree programs in Jazz Studies, the creation of a new Ph.D. degree in Music, the creation of a new string quartet residency, the recruitment of the Chiara String Quartet to occupy that residency, the creation of 8 new faculty lines, and the completion of 22 faculty searches. Finally, Dr. Richmond helped UNL and the University of Nebraska Foundation expand its financial resources supporting music and dance such that the GKSOM endowments quadrupled to roughly $20 million.

Richmond’s research focuses on arts education policy, legal issues in arts education, and the philosophy of music education. He is published in the Journal of Research in Music Education, Research Perspectives in Music Education, Arts Education Policy Review, International Journal of Music Education, Journal of Aesthetic Education, and Choral Journal, as well as a number of research monographs, including a chapter on Hindemith in On the Nature of the Musical Experience, edited by Bennett Reimer and Jeffrey E. Wright (Niwot, CO: University Press of Colorado, 1992). He is a founding director of the Suncoast Music Education Forum, the founding editor of the Florida Choral News, and served as the conference director for the 1994 World Conference of the International Society for Music Education (ISME). Richmond edited the Policy/Philosophy Research Section of the New Handbook of Research in Music Teaching and Learning for Oxford University Press and also wrote its chapter on “Law Research and Music Education.” He contributed four biographical entries and an institutional article for the new AmeriGrove Project, a chapter for the Oxford Music Education Handbook, vol. 1, edited by Gary E. McPherson and Graham F. Welch, and a chapter for Composing Our Future: Preparing Music Educators to Teach Composition, edited by Michele Kaschub and Janice Smith. Dr. Richmond served a 3-year term on the Editorial Board of Arts Education Policy Review (2013-15).

Richmond has appeared across North America, Europe, Africa, and Asia as a guest conductor, speaker, clinician, and consultant. Recent speaking engagements include the 2019 Commencement Festival Keynote Address at Die Hochshule für Musik Würzburg (Germany), the 2012, 2013, 2015, and 2019 NASM National Conventions, the 2010 and 2014 ISME World Conferences (Beijing and Porto Alegre respectively), the 2007 World Conference of the College Music Society (Bangkok), the 2010 25th Anniversary Conference of the Center for the Study of Education and the Musical Experience (Northwestern University), the 2010 Mayday Conference on Music Education and Professional Ethics (Montclair State University, NJ), the 2013 Keynote Address to the Rocky Mountain Chapter of the College Music Society (Denver), a 2013 Nebraska Week Lecture on Interdisciplinary Research at Xi'an Jiaotong University (China), and the 2016 Summit on New Music Schools for the College Music Society (South Carolina). Richmond was elected to two terms on the NASM Commission on Accreditation (2008-2014).

Richmond was a recipient of the 2015 Citation for Achievement Award from William Jewell College, the highest award Jewell confers upon its alumni.