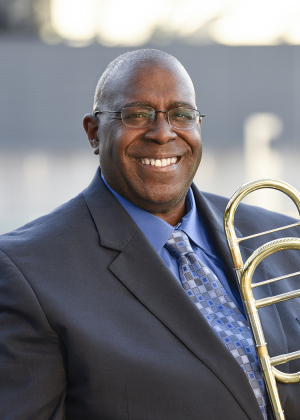 Considered one of the finest trombonists of his generation, Tony Baker is currently a faculty member at the University of North Texas College of Music. Previously, Mr. Baker served as assistant professor of trombone at Ohio University and as visiting assistant professor of trombone and euphonium at Kent State University. A native of Little Rock, Arkansas, he is an alumnus of the University of Minnesota and the University of Central Arkansas. Mr. Baker's professional experience is as varied as it is substantial. Currently a member of the Dallas Opera Orchestra, he has performed with ensembles such as the ProMusica Chamber Orchestra, the Minnesota Opera Orchestra, the New Hampshire Music Festival Orchestra, and the Dallas, Richardson, Columbus, Akron, Arkansas, and Duluth-Superior symphony orchestras.

Mr. Baker’s chamber music experience includes past memberships of the Kent Brass Quintet and OhioBrass, of which he was a founding member. He was also a member of the Appalachian Trombone Quartet. Mr. Baker performed with this ensemble on two tours of the Midwestern United States and on a 2001 tour of the United Kingdom. Mr. Baker currently is a member of the University of North Texas Faculty Brass.

As a jazz musician Mr. Baker has performed with groups such as the Woody Herman Band and Jimmy Dorsey Orchestra. He has also performed on stage with such artists as Wynton Marsalis, Steve Turre, Terry Gibbs, John Fedchock, Chris Vadala, and Jiggs Whigham. As a jazz clinician, Mr. Baker is on the faculty of summer jazz workshops at the University of North Texas and Northwest College in Cody, Wyoming. Mr. Baker is a regular faculty member of the University of North Texas Trumpet and Trombone Workshop, University of North Texas Combo Workshop, and Yellowstone Jazz Camps. He was also a guest artist at the 2002 Redbud Jazz Festival and the 1999 Capital University Jazz Week. Mr. Baker served as the All-State Conductor of the 2004-2005 Minnesota All-State Jazz Ensemble. Mr. Baker has recorded with the Sounds of Blackness and can be heard with this group on their Grammy-nominated compact disc, Time for Healing. From October 1997 to April 2000 Baker was lead trombonist of the Columbus-based professional big band Jazz-to-Go. The recipient of many prizes and awards, Mr. Baker's honors include a first place in Brass Performance in the 1991 Music Teachers National Association Wurlitzer Collegiate Artist National Competition.