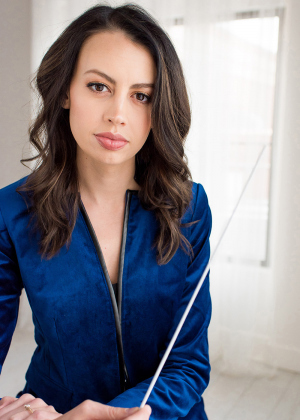 Stephanie Rhodes Russell recently completed a residency as Conducting Fellow with the Fort Worth Symphony Orchestra where she appeared regularly with the ensemble leading education, family, and community concerts while serving as cover conductor for the symphonic subscription series. She is the recipient of a 2019 Solti Foundation U.S. Career Assistance Award, designed to aid outstanding young conductors in developing their talents and careers.

A renowned opera collaborator and pianist, Ms. Rhodes Russell returns to Wolf Trap Opera in Summer 2022 for a production of Floyd's Susannah and makes her Austin Opera debut in November with Rossini's Barber of Seville. In Fall 2021 she joined Opera Orlando to conduct Verdi’s La traviata and was scheduled to serve as Music Director for Opera Philadelphia’s production of

Henze’s El Cimarrón (cancelled). Her 2020-2021 season included scheduled returns to the Dallas Opera to conduct Bizet’s Dr. Miracle, a concert of opera excerpts at the NorthPark Center, and the highly anticipated “Lawrence Brownlee: Songs for Dallas” concert in the AT&T Performing Arts Center. Additionally, she conducted a filmed production of Britten’s Turn of the Screw with the Temple University opera program, and in the summer of 2021 she joined Madison Opera for their annual Opera in the Park program.

She has served on the music staff of the Bolshoi Theatre of Russia, The Dallas Opera, Houston Grand Opera, LA Opera, San Francisco Opera, and Washington National Opera, amongst others, and her extensive operatic experience in the roles of assistant conductor, prompter, chorusmaster, rehearsal pianist, and diction coach, brings a comprehensive understanding to her work.

Dr. Rhodes Russell frequently draws on her Russian specialty and in summer 2020 conducted excerpts of Tchaikovksy's Eugene Onegin for Wolf Trap Opera, a change from the scheduled full production due to Covid-19.  A Fulbright award recipient in Russia, she lived in Moscow specializing in Russian repertoire and pronunciation for non-native singers while working as a guest coach at the Bolshoi Theatre of Russia. She was thereafter commissioned by The Dallas Opera to transliterate Tchaikovsky’s Iolanta and has taught workshops on Russian diction for singers at young artist programs and universities across the United States.

Following her work on the San Francisco Opera Ring Cycle, she was appointed the 2019 Associate Conductor of the Grand Teton Music Festival, where she served as assistant to Music Director Donald Runnicles and led the GTMF orchestra in the Hartley Family Concert. Additionally, she performed as a pianist in the festival's renowned Chamber Music Concert Series.

Other recent engagements include concerts with the American Festival Chorus and Orchestra, performances of Handel’s Alcinaat the University of Michigan in Ann Arbor, an engagement with Washington National Opera’s forum for new works, the American Opera Initiative, and The Magic Flute and Dido and Aeneas with the Miami Music Festival. Highlights as an Assistant Conductor include work on two Wagner Ring Cycles with conductors Philippe Auguin and Donald Runnicles and productions of Iolanta, Eugene Onegin, and Queen of Spades with Emmanuel Villaume and Carlo Rizzi.

As founder and Board Chair of the non-profit Women’s Artistic Leadership Initiative (Women’s ALI), she is dedicated to the education and empowerment of young female artists, training them to become future community leaders by equipping them with both leadership skills and business acumen. An alum of the Dallas Opera's Institute for Women Conductors, the Houston Grand Opera Studio and San Francisco’s Merola Opera program, she holds degrees in collaborative piano and piano performance from the University of Michigan and Utah State University, respectively, and completed a doctorate in orchestral conducting at the University of Utah.