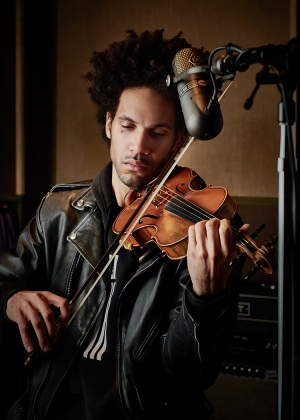 Scott Tixier is an affiliated GRAMMY award-winning French jazz violinist and 2018 DownBeat Critic Poll Winner. He has performed, recorded and toured with jazz legends and music icons such as Stevie Wonder, Kenny Barron, Elton John, Pink Floyd, Ed Sheeran, Cassandra Wilson, Coldplay, Chris Potter, John Legend, Christina Aguilera, Natalie Cole, Anthony Braxton, Ariana Grande, and many others. In addition to performing in and out of the jazz world Tixier is known for his work on motion picture scores such as The Lion King, John Wick, Charlie’s Angels and TV shows including "The Tonight Show with Jimmy Fallon" on NBC, "The Late Show with Stephen Colbert" as well as the previous format with David Letterman, "Late Night with Seth Meyers," "America's Got Talent" and most recently with Netflix for Spike Lee's new film in collaboration with composer Terence Blanchard (released in 2020).

Tixier studied classical violin at the conservatory in Paris. Following that, he studied improvisation as a self-educated jazz musician. He was based in New York for over a decade where he performed in all the major venues across the United States including Carnegie Hall, Radio City Music Hall, Madison Square Garden, Barclays Center, Jazz at Lincoln Center, Blue Note Jazz Club, Apollo Theater, Smalls Jazz Club, The Stone and U.S. Capitol.

Grammy Award-winning bassist Marcus Miller says that Tixier "made an international name for himself. I heard him in France and was immediately struck by his individuality and his sound. “ Guitarist Pat Metheny says, "[Scott] has found a place for himself within the elite community of New York jazz musicians, no small feat." And Jean-Luc Ponty said, "I have heard Scott's recordings, seen his live performances and I think that he stands above the crowd of current jazz violinists around the world."

In August 2018 Tixier joined the UNT College of Music as an assistant professor of violin (Jazz/Popular/Alternative Styles) and director of the Jazz String Lab band. UNT is the first jazz studies program in the United States to offer a degree for jazz strings at a doctoral level.

What the press said about Tixier: One of his generation’s extraordinary talents, Tixier has made a name for himself as a violinist-composer of wide-ranging ambition, individuality and drive — “the future of jazz violin” in the words of DownBeat Magazine and “A remarkable improviser and a cunning jazz composer” in those of NPR. “Taking the jazz world by storm” as the All About Jazz Journal put it. While the New York Times declared “Mr. Tixier is a violinist whose sonic palette, like his range of interests, runs open and wide,” Jazz Times said, “Tixier has a remarkably vocal tone, and he employs it with considerable suspense.”