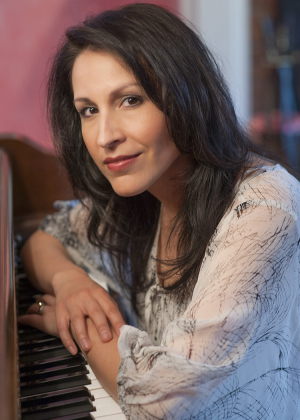 Praised as a world-class artist, and with an international reputation in several facets of the music industry, Rosana Eckert wears many hats as a versatile live and studio vocalist, a dynamic improviser, a creative songwriter and arranger, and a masterful educator of jazz and voice. She has performed and recorded with many jazz luminaries, including Christian McBride, Bobby McFerrin, George Duke, Bill Mays, Jon Faddis, Marvin Stamm, and the New York Voices. Recently, she was one of the three vocalists on "Eberhard," the 13-minute mini-symphony and final recording of 11-time Grammy-winning jazz pianist Lyle Mays, which was released posthumously in August 2021 and nominated for a Grammy Award. Performing regularly with her own bands and projects, Rosana's critically acclaimed 5th solo album Sailing Home, produced by Peter Eldridge in 2019, was praised as "bright and innovative" (AllAboutJazz) and “alluring” (Jazz Weekly). In 2021, her Brazilian jazz fusion band, Brasuka, released their highly acclaimed debut album of original songs titled A Vida Com Paixão. Lauded as “addictively joyful” (Exclusive Magazine), "positively infectious" (The Big Takeaway), and “entirely engaging and entertaining"(Phil’s Picks), the album received 4 stars in Downbeat Magazine and All About Jazz.com, and it made several "Best of 2021" music lists.

A renowned educator, Rosana is principal lecturer of jazz voice and has helped build the thriving UNT vocal jazz department since 1999, teaching private jazz voice lessons and performance techniques, and creating new courses in songwriting and vocal pedagogy.  Her students have gone on to win awards and prestigious competitions, tour the world as solo artists and back-up vocalists, establish music schools and private lesson studios, publish choral arrangements, produce studio sessions and live music events, and work as studio singers on movie soundtracks and commercials.  Rosana also serves on the faculty of the UNT Vocal Jazz Summer Workshop and the New York Voices Summer Vocal Jazz Camp, and she has been a visiting teacher and lecturer for many institutions and programs, including the Centro Cientifico da Voz in São Paulo, Brazil, the Golden Jazz Music Camp in Zhuhai, China, The Speech Level Singing Summer Program in Hollywood, CA, and the online Jazz Harmony Retreat.

A versatile musician, Rosana is also in demand as a commissioned choral composer/arranger, guest conductor, and article/book author. Her many published vocal ensemble arrangements, for all levels of singer, have been performed worldwide, and she has conducted 14 All-State jazz choirs around the country. Her book, Singing with Expression: A Guide to Authentic and Adventurous Song Interpretation, has been called ground-breaking, encyclopedic, and an unparalleled resource for contemporary singers, and she was a contributing author for The Voice Teacher's Cookbook, which features "recipes" from 50 renowned voice teachers from around the country.  Passionate about sharing jazz with children, she co-wrote a jazz musical for young voices with author/educator Sharon Burch titled Freddie the Frog and the Jungle Jazz.  The two also collaborated on an elementary music collection called Jazz And Kids: Songs and Activities for a Swingin' Classroom.  A highly respected improviser, Rosana is a featured artist on the vocal improvisation app Scatability by Michele Weir as well as the female vocalist on the tracks for Darmon Meader’s popular book Vocal Jazz Improvisation:  An Instrumental Approach. During the pandemic of 2020, she and Darmon created the Vocal Jazz Improvisation Boot Camp, an ongoing series of online improvisation classes, attracting singers of all levels from around the globe.

In addition to her extensive live performing, writing, and teaching, Rosana works regularly as a studio vocalist, producer, and voice-over actor in Dallas, TX.  As a voice-over actor, she has spoken on many commercials and industrial spots for clients such as AT&T, PetSmart, Direct Energy, Comcast, and EA Games, and she is the in-house voice for KERA TV, Dallas’s award-winning PBS station. She has served as a producer on a wide array of projects, from solo vocal albums to children’s musical theatre, and as a studio vocalist, Rosana has sung on hundreds of commercials, album projects, publishing demos, and radio IDs heard around the world.