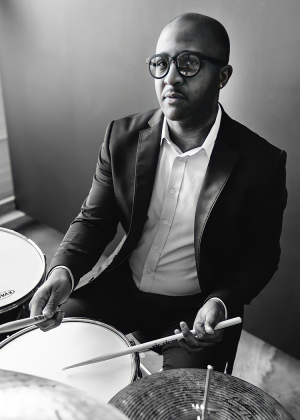 Currently Associate Professor of Jazz Drumset at the University of North Texas, Quincy Davis, born in Grand Rapids, Michigan, comes from a very musical family.  He began taking piano and drum lessons at age 6. In his elementary and middle school bands, he also played trumpet and tuba. Both of his parents are musicians who exposed him to different styles of music including instrumental jazz, European classical, gospel, opera, R&B and jazz-fusion.

His formal music studies began during his 11th grade year at Interlochen Arts Academy. There he studied classical percussion and began playing drumset in jazz bands with peers for the first time.

After graduating from WMU in 1999, Davis taught elementary and middle school instrumental music in the Grand Rapids area for one year where he taught beginner, intermediate and advanced concert band before moving to New York City.

In the summer of 2000, Davis moved to New York City where he quickly became one of the highly sought after “young cats” on the New York jazz scene. In New York, Davis frequently played at all the famous jazz venues including Village Vanguard, Blue Note, Smalls, Jazz Standard, Birdland, Iridium, Dizzy’s Coca-Cola Club and Smoke.

In 2010, Davis accepted a teaching position at the University of Manitoba (Canada) where he was the assistant professor of jazz drumset. He, along with the other world-renowned faculty, helped to bring more visibility to the program that has since produced some very successful students, winning many awards and making a name for themselves on the international stage.

In 2013, Quincy released his debut recording as a leader, Songs In the Key of Q, which rose to #1 on Jazz Week’s radio jazz chart. His sophomore release, Q Vision, was ranked #3 for 5 weeks. Both albums feature all original music written by Davis.

Davis began teaching at the University of North Texas in 2017 where he is currently chair of the drumset department.

Davis stays very active as a performer in the United States and internationally. His passion for teaching is not only evident through his teaching at the University of North Texas, but also through his many video lessons on jazz drumming and interviews with master drummers on his YouTube channel which currently has 15k subscribers.