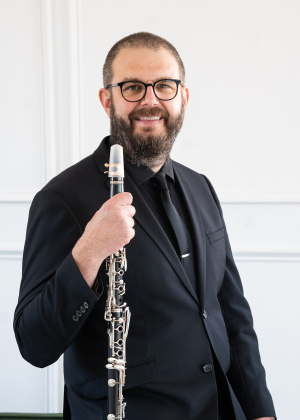 Clarinetist Phillip O. Paglialonga has quickly emerged as one of the leading performers and pedagogues of his generation. His book, Squeak Big: Practical Fundamentals for the Successful Clarinetist was released in August 2015 by Imagine Music Publishing and has garnered significant praise from leading clarinetists including prominent members of the orchestras in Chicago, Detroit, Philadelphia, San Francisco and Seattle, as well as stellar reviews in several major publications.

His latest recording, In a Time of War, is with pianist Richard Masters and was released by Heritage Records. The new album includes works by John Ireland and Sergei Prokofiev.

For the last decade he was a member of the PEN Trio, a woodwind trio that regularly toured throughout the United States and performed in a dozen other countries. In September 2019 Summit Records released Found Objects: New Music for Reed Trio, which includes new works, written expressly for the PEN Trio, by composers William Bradbury, Jenni Brandon, M. Shawn Hundley and Aleks Sternfeld-Dunn.

Currently Dr. Paglialonga serves as associate professor of Clarinet at the University of North Texas, and as the pedagogy coordinator for the International Clarinet Association. He is an artist for both Buffet Crampon and Gonzalez Reeds.