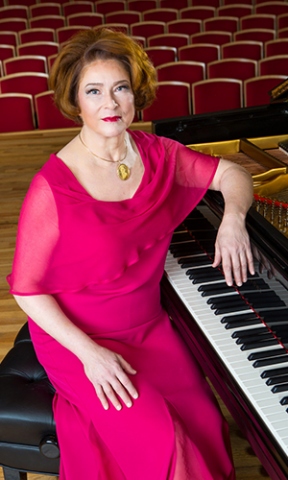 Pamela Mia Paul is both a brilliant performer and a deeply dedicated teacher. On stage, she has performed with the world’s great orchestras. She has given concerts throughout the United States, and in Europe, the People’s Republic of China, South Korea and Turkey both as soloist and as chamber musician. In the studio, or in the setting of a masterclass, she is an internationally sought-after pedagogue whose students hold teaching positions throughout the United States and Asia, and who have participated in and won competitions including the Nina Widemann Competition and Naumburg International Piano Competition. Ms. Paul has commissioned and premiered works for the piano; Robert Beaser’s Piano Concerto, which was written for her, had its world premiere in the United States with the St. Louis Symphony conducted by Leonard Slatkin, and in Europe with the Monte Carlo Philharmonic under the baton of American conductor Richard Dufallo. The Beaser Concerto had its New York premiere in 1992 at Carnegie Hall, with Dennis Russell Davies conducting the American Composers Orchestra. In 2012 Ms. Paul commissioned a concerto for piano and symphonic winds from Steven Bryant. The concerto was premiered with the UNT Wind Symphony conducted by Eugene Migliaro Corporon and recorded for release on the Klavier label in December 2012.

Miss Paul has received critical acclaim for her appearances with orchestras in the United States and Europe, where her interpretations of both standard repertoire and twentieth-century piano concertos have garnered consistent critical praise.

As a chamber musician, she has been an invited guest artist at the Salzburg and Bregenz festivals in Austria, Aspen Music Festival in Colorado, and Music Mountain in Connecticut. Quartets with which she has performed include the Cassatt, Penderecki, Borromeo, Chester, Orlando, Leontovich, Miro, DaPonte and St. Petersburg.

Summer programs at which Ms. Paul has taught include the Prague International Master Classes, The Institute for Strings, and the Vienna International Piano Academy. She has presented masterclasses in Europe, the People’s Republic of China, Turkey, South Korea, and throughout the United States. Pamela Mia Paul received the doctor of musical arts, master of music, and bachelor of music degrees from the Juilliard School. Dr. Paul was selected as one of five judges for the international screening jury of the 2017 Van Cliburn International Piano Competition.

She is currently regents professor of piano at the University of North Texas and is a Steinway artist.