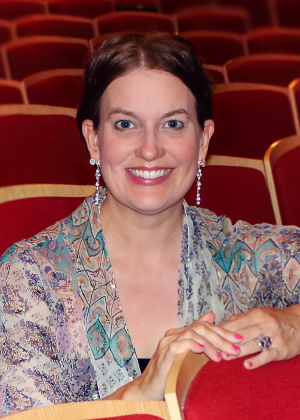 Chair of the Division of Vocal Studies

Described by Gramophone as “a compelling interpreter”, Molly Fillmore made her Metropolitan Opera debut as Helmwige in their production of Der Ring der Nibelungen.   She returned to the Met to sing a principal role in Satyagraha by Philip Glass. Both of these productions were shown live in movie theaters around the world as part of the Met’s Live in HD series as well as on PBS stations nationwide as part of their Great Performances series. She can be heard and seen on the Grammy-winning Deutsche Grammophon CD and DVD/Blu-Ray of Die Walküre from The Metropolitan Opera under the musical direction of James Levine and Fabio Luisi, as well as on the recently released (2021) DVD and CD of the Metropolitan Opera’s production of Satyagraha.

She made her soprano debut in the title role of Salome at San Francisco Opera, a role which she also sang for Arizona Opera, and covered at The Metropolitan Opera.  She sang the role of Ortlinde in Francesca Zambello’s San Francisco Opera production of Die Walküre, conducted by Donald Runnicles. Other American opera appearances as a soloist include Seattle Opera, Spoleto Festival, and Washington National Opera.  She made her role debut as Marietta/Marie in Die tote Stadt with Theater St. Gallen, Switzerland and sang the title role of Turandot with the University of North Texas Symphony.

Before her switch to dramatic soprano repertoire, Molly Fillmore had an international career as a mezzo-soprano, including five seasons as a principal soloist in the ensemble of Oper der Stadt Köln (Cologne Opera), where she appeared in over twenty roles, including Cherubino in Le nozze di Figaro, Romeo in I Capuleti e I Montecchi, Don Ramiro in La finta giardiniera, Mercedes in Carmen, Wellgunde in Das Rheingold, and Waltraute in Die Walküre.  Other mezzo-soprano appearances included the roles Orfeo in Orfeo ed Euridice, and Margret in Wozzeck.

On the concert stage, Molly Fillmore has appeared as a soloist in an operatic concert with the Boston Symphony Orchestra at Tanglewood, the Mozart Requiem and Handel’s Messiah with the Detroit Symphony, La damnation de Faust with Utah Symphony, Vaughan Williams’ Magnificat and an opera gala with the Choral Arts Society of Washington, the Mozart Requiem at Carnegie Hall, a Gershwin celebration and Mozart Requiem at Lincoln Center, Isolde’s “Liebestod” at the Interlochen Arts Festival, Stravinsky’s Les Noces at the Great Lakes Chamber Festival, and in the Saint-Saëns Oratorio de Noël, broadcast on DeustchlandFunk Radio. She appeared opposite baritone Mark Delavan in Mendelssohn’s Elijah, which she also sang with the UNT Symphony Orchestra.  Molly Fillmore recently debuted Samuel Barber’s Knoxville: Summer of 1915 and the Bachianas Brasileiras of Villa-Lobos for the Sherman Symphony, and she has sung both the soprano and mezzo-soprano parts of a favorite work, the Verdi Requiem, multiple times on professional stages.

An active recitalist, she studied German art song at the Franz-Schubert-Institut in Baden-bei-Wien.  She gave a joint recital with tenor Ernst Haefliger at the International Beethoven Festival in Bonn and has been heard in recital in Switzerland, Germany, Austria, China and various cities in the United States.

Molly Fillmore made her solo operatic debut with the Washington National Opera at the Kennedy Center Opera House while a sophomore at American University. By the time she had completed her Master of Music degree, she had appeared in seven solo roles (including a leading role in the zarzuela El Gato Montes) with the Washington National Opera and as a soloist in numerous concerts at the Kennedy Center Concert Hall.

A native of northeast Ohio, she graduated magna cum laude with a B.A. in music from American University in Washington, D.C., and is the recipient of the university’s Evelyn Swarthout Hayes award, given to the student who has contributed most to the Washington, D.C. performing arts scene while maintaining a high grade point average.  She holds a Master of Music degree from The University of Maryland.   She taught voice at Michigan State University for ten years and, in 2014, joined the faculty at the University of North Texas, where she holds the position of Professor of Voice and Chair of the Division of Vocal Studies.  She has given numerous master classes both in the United States and in China, and she has former students who now serve on the faculty of secondary music institutions.   She regularly produces abridged summer opera productions for her studio members and others in the Division of Vocal Studies in order to provide role performance opportunities.