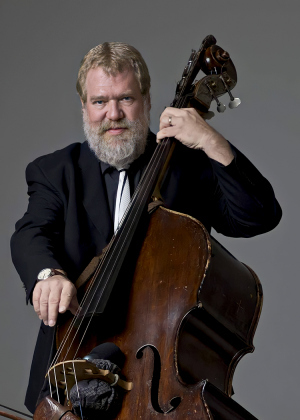 Lynn Seaton is a Regents Professor in the Jazz Studies Division of the College of Music. Professor Seaton teaches jazz bass Lessons, Jazz Performance Fundamentals I for Bass, Jazz Performance Fundamentals II for Bass, and coaches small groups. He serves as director of the Jazz Double Bass Workshop at UNT. He was honored to be named a Fulbright Scholar to teach and perform in Latvia.

Prof. Seaton is an active working professional musician in the Dallas/Fort Worth metroplex. He has recorded and toured with many jazz greats including Kenny Drew, Jr., John Fedchock, Tim Hagans, Cal Collins, Bobby Shew, George Shearing, Frank Wess and the big bands of Woody Herman and Count Basie.

Prof. Seaton was born in Tulsa, Oklahoma, July 18, 1957. He began studying classical guitar at age seven, switching to string bass at age nine. While studying music at the University of Oklahoma, he began working the clubs around the state.

In September of 1980, Lynn relocated to Cincinnati, Ohio to join the Steve Schmidt Trio and the Blue Wisp Big Band. He was awarded a Jazz Studies Fellowship in the summer of 1981 from the National Endowment for the Arts to study with Rufus Reid.

Lynn has been a faculty member at the College Conservatory of Music in Cincinnati, Long Island University, State University of New York at New Paltz, William Patterson College, and has taught at the University of North Texas since 1998. He thoroughly enjoys teaching workshops, coaching ensembles, and doing artist-in residence programs, having done many throughout America and Europe including numerous schools, kindergarten through college, Jamey Aebersold's and UNT jazz camps, and Clark Terry's Institute of Jazz Studies. He currently has private students as well.

During September of 1984, Lynn joined Woody Herman and the Young Thundering Herd. July of 1985 brought him a position with the Count Basie Orchestra. During this time he moved to New York City (1986) where he resided until 1998. After his two-year engagement with the Basie Band, he did an extended tour with Tony Bennett and a six-month tour with George Shearing. Much of 1991 was spent touring with Monty Alexander. 1992 through 1994 was spent freelancing in the New York area. 1995 until the fall of 2000 was with the Jeff Hamilton Trio. He has performed at festivals worldwide including the Bern, Concord, JVC, Kool, Kyoto, Chicago, Nice, Elkhart, Kansas City, Montreal, Edmonton, Newport, North Sea, Perugia, West Coast, San Sebastian, Ottercrest, Topeka, Sarasota, Paradise Valley and Poori. At present, Lynn is freelancing and touring as a performer and clinician with a variety of people.

He is currently living in Highland Village, Texas, working and recording with many great jazz artists, and leading his own trio. His own critically acclaimed recordings "Bassman's Basement" is available on Timeless Records, Zoom Blewz on Armored Records, Live!!! on ISB Records, and Solo Bass Flights on Omnitone Records. Kendor Press has published his book Jazz Solos for Bass.

"Seaton is a bass player with a technique beyond imagining--his hand slides up and down the neck of the bass with the speed of the darting tongue of a cobra, his fingers dance on the strings a la Fred Astaire, and the notes come bursting forth."
Sid Weinberg, Blue Notes Jazz Letter

"Lynn is an excellent player, inspiring clinician, outstanding teacher and one of the finest musicians presently preserving the music through education"
Jamey Aebersold

"An imaginative and deft soloist, he draws a remarkable wealth of sonorities from his instrument. Seaton is particularly fond of playing with the bow, which he masters with great virtuosity. Regardless of the tempo, his music radiates exquisite swing."
Aleardo Buzzi, Claves Jazz

"Lynn Seaton is an outstanding musician who has provided our students with meaningful instruction during our jazz residency."
Rob Ratner, Director of Performing and Fine Arts, Mineola, NY Schools

"His sound is like that of the fine orchestral bassist, for he has developed his Arco technique to the level of his formidable pizzicato...Lynn Seaton has effectively established his own voice in current jazz music."
Matthew Hughes, International Society of Bassists Magazine