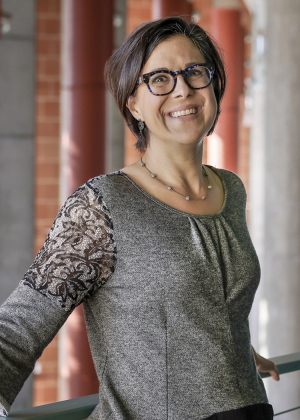 Chair of the Division of Instrumental Studies

With reviews such as “a most skillful artist” (Fanfare Magazine), “breathtaking…” (The Clarinet), “virtuosic tone and technique”(Tampa Bay Times), “exceptionally sensitive and introspective rendition” (The Clarinet), Kimberly Cole Luevano continually establishes herself as a formidable soloist and chamber musician.  Currently Professor of Clarinet and Chair of the Division of Instrumental Studies, Luevano joined the University of North Texas faculty in 2011. She was a member of the clarinet faculty at the Interlochen Arts Camp from 2003 to 2012, has served the International Clarinet Association as Pedagogy Chair and is currently coordinator of the ICA High School Competition. Luevano has presented acclaimed solo and chamber performances, adjudicated, and presented masterclasses on four continents and has performed at the International Clarinet Association’s ClarinetFest® on numerous occasions.  Her students have been prize winners in international competitions, and former students now occupy performing and teaching positions throughout the United States and Canada.  With pianist Midori Koga and soprano Lindsay Kesselman, she forms the trio, Haven, “….A refuge for the creation of new music for soprano, clarinet, and piano.”  She is also a founding member of the acclaimed clarinet, violin, and piano trio, TrioPolis.

Luevano’s recordings on the Fleur de Son label, “Bright Angel” (2013) and “Atonement” (2015), received critical acclaim and were included in the Grammy nomination process. Haven recently received 2021 commissioning grants from both the Chamber Music America Classical Commissioning Fund and the Barlow Foundation to partner with composers Ivette Herryman-Rodriguez and David Biedenbender, respectively, in the creation of new works for the trio.  Luevano’s disc of world premiere recordings with TrioPolis, TrioPolis One, was released on the Fleur de Son label in 2017. Her recording of Michael Daugherty’s “Brooklyn Bridge” with the UNT Wind Symphony was released on the GIA label in 2016, and numerous chamber recordings are available on the Centaur and Albany labels.  A versatile freelance musician, Luevano has performed as a member of the Michigan Opera Theater Orchestra, as principal clarinetist of the Ann Arbor, Lansing, Toledo, and Traverse Symphony Orchestras, with the Detroit and Windsor (Canada) Symphony Orchestras, and with Keith Brion’s New Sousa Band, among others.  As an advocate of contemporary American repertoire, Luevano spearheaded consortiums to commission works for clarinet from composers Evan Chambers and Roshanne Etezady and will record William Bolcom’s clarinet concerto with the UNT Wind Symphony in April 2022.

Luevano plays and endorses Selmer Paris instruments and is a D’Addario and Company Performing Artist.  She resides in Corinth with her husband, two teen-aged sons, and a spirited border collie.