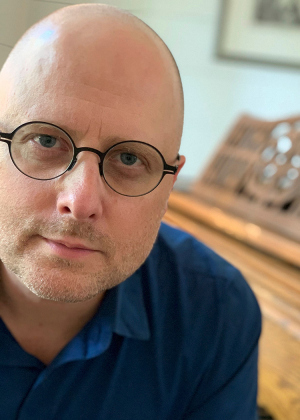 Andrew "Drew" Schnurr is an assistant professor of composition and media arts at University of North Texas. Schnurr is a Los Angeles composer, sound artist, theorist, and performer blurring traditional lines in media and musical genre. Schnurr’s wide-ranging experience in classical music, electronic music, rock, jazz, Latin music and other international music forms combined with his expertise in modern sound design, music production and audio technology, informs his diverse approach. Over the past decade, his works have been performed nationally and internationally at various festivals and venues including the Ford Amphitheater, Harris Hall (Aspen, CO), Forge (London, UK), and as a featured composer at the Chamber Music Festival of Lexington and highSCORE Music Festival in Pavia, Italy, while his scoring and sound design work has been featured on various television networks, and internationally on film screens and in galleries. Schnurr is acclaimed as an innovative solo performer playing traditional stringed instruments mixed with electronic sounds in live improvisation. His current creative work engages multiple levels of visual, music, and social culture.

Schnurr was on faculty at the UCLA Department of Design Media Arts from 2005 to 2011 where he taught sound and sonic-visual aesthetics. In 2013, he completed his PhD in composition from UCLA. He has since returned to UCLA, serving on faculty at the Herb Alpert School of Music, teaching electronic music and sonic arts. He previously studied bass performance and jazz studies at Western Michigan University and was recipient of a master's in double bass performance from the Thornton School of Music at the University of Southern California. Drew Schnurr has commercial releases of both film and concert music with German record label Coviello Classics (Hamburg) with distribution through NAXOS, and with Ludwig Records on iTunes. Planning is underway with production to begin in 2020 on Schnurr’s next international release with Coviello.