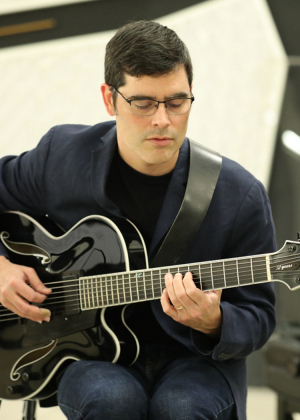 Davy Mooney is a jazz guitarist from New Orleans who records for Sunnyside Records and is assistant professor of jazz studies and head of the jazz guitar program at the University of North Texas, where he teaches private lessons and advanced jazz improvisation.

He has recorded seven CDs as a leader, and many others as a sideman. His latest Sunnyside CD: Davy Mooney and the Hope of Home Band Live at National Sawdust, was recorded live in Brooklyn with Brian Blade, Jon Cowherd, John Ellis and Matt Clohesy. In 2018 he recorded Benign Strangers, a collaboration with Japanese drummer Ko Omura (also on Sunnyside), and toured Japan to promote the release in the summer of 2018. His previous Sunnyside releases are 2017’s Hope of Home, and 2012’s Perrier St, both featuring Blade, Cowherd, Ellis, and Clohesy. In promotion of these CDs, Mooney has toured the United States extensively, as well performed in Brazil, Japan, Mexico, Peru and Myanmar.

Mooney’s guitar and improvisation instructional book Personalizing Jazz Vocabulary was published by Mel Bay in 2019 who also published Into the Labyrinth, An Anatomy of Position Playing for Jazz Guitar in 2022.

Mooney has a PhD in jazz performance from New York University, and wrote a dissertation on the early 1960s work of Joe Pass entitled “Joe Pass’s Catch Me!, For Django, and Joy Spring: Transcription and Analysis.”

He competed in the 2005 Thelonious Monk International Guitar Competition, placing third, and studied at the Thelonious Monk Institute of Jazz Performance from 2007 to 2009, under artistic director Terence Blanchard. The Monk group worked with many jazz legends—including Herbie Hancock, Wayne Shorter, Dee Dee Bridgewater, and Ron Carter—and toured Panama and India.

Mooney received his master’s degree from the University of New Orleans (his hometown) in 2005. Shortly thereafter (in the wake of Hurricane Katrina), he relocated to New York City, and began performing at clubs such as the 55 Bar, The Bar Next Door, The Blue Note, and Smalls. In 2006 he recorded a duo guitar CD with John Pizzarelli entitled Last Train Home. The following year he recorded Astoriano, released on the Japanese label LateSet Records.

Mooney has also made the foray into the literary world by self-publishing two novels: 2017’s Annalee and 2012’s Hometown Heroes.