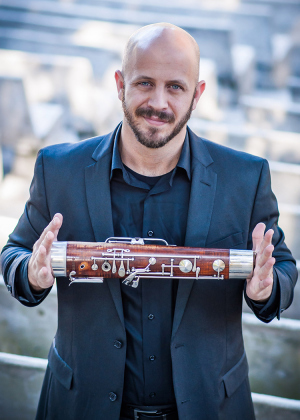 Darrel Hale joined the UNT College of Music in August of 2021 as the associate professor of bassoon. A native of Denver, Colorado, he is Principal Bassoon of the Baton Rouge Symphony Orchestra. Prior to his position at UNT, he was a member of the faculty at Louisiana State University. He served as acting principal bassoon of the Knoxville Symphony Orchestra under Lucas Richmond. An active orchestral performer, he has also served as the principal bassoonist of the Kentucky Symphony Orchestra and Springfield Symphony Orchestra and has performed with several other orchestras including the Fort Worth Symphony, Dallas Chamber Orchestra, Cincinnati Symphony Orchestra, Louisiana Philharmonic, Dayton Philharmonic, Cincinnati Chamber Orchestra, Gulf Port Symphony, Shreveport Symphony, Meridian Symphony, Chattanooga Symphony and Cincinnati Symphony Chamber Players. As a fellow at the Aspen Music Festival, Hale performed as a member of the Aspen Academy of Conducting Orchestra under Maestro David Zinman and for three summers as the second bassoon in the Aspen Festival Orchestra alongside Per Hannevold. he comes to the University of North Texas from Louisiana State University where he was an associate professor.

A dedicated teacher, Hale has presented masterclasses in a variety of venues including the International Double Reed Society Conference in 2019, Meg Quigley Symposium Pre-College Camp in 2021, Hot Springs Festival, Midwest Musical Imports Master Class Series, and at many universities and conservatories throughout the United States including the College-Conservatory of Music, University of Texas Austin, Baylor University, Ohio State University, Unversity of Kentucky, University of Southern Mississippi and University of Georgia Athens. During the 2020 Covid pandemic, Hale worked with colleagues Ann Shoemaker (Baylor) and Yoon Joo Hwang (UCF) to create a series of online master classes that virtually connected students from around the globe with major international professional bassoonists for a series of masterclasses. Dr. Hale also currently serves as a co-editor with Amy Pollard (UGA) of the IDRS Online Fingering Chart Project and as a Competition Committee member of the Meg Quigley Vivaldi Competition.

As an active advocate for the expansion of the bassoon repertoire, Darrel Hale has commissioned several new works for bassoon and voice with his duo partner, mezzo-soprano Megan Ihnen. These new works include Ahead of All Parting (2019) by Jenni Brandon, Aurora (2019) by Hannah Rice, White Ash (2019) by Mara Gibson, Washing Water Buffalo in the Ocean (2019) by Gregory Brown, and Millary Songs (2020) by Dana Kaufman. Hale has also been a consortium member on works by Drew Baker, Jenni Brandon, and Nico Muhly. In May 2021, Darrel Hale premiered a new concerto for bassoon and orchestra written for him by Mara Gibson entitled Escher Keys.

As a recitalist, Darrel Hale has performed at several International Double Reed Society Conferences including those held in Spain and Tokyo, Japan as well as at the Meg Quigley Symposiums in 2019 and 2021 and International Clarinet Association Conferences in 2014 and 2016. As a soloist, Hale has appeared with the ensembles at Louisiana State University performing the Mozart Concerto in Bb Major, K. 191, Weber’s Andante and Hungarian Rondo, and Ellen Taaffe Zwilich’s Concerto. In January 2020, Hale appeared with his colleagues in the Baton Rouge Symphony Orchestra to perform the Mozart Sinfonia Concertante with BRSO under the direction of Maestro Timothy Muffitt.

Darrel Hale received a bachelor of music degree in bassoon performance from the University of Colorado at Boulder where he studied with Yoshiyuki Ishikawa. He continued his training at the College-Conservatory of Music in Cincinnati, Ohio where he completed his DMA while studying with the late William Winstead. His other teachers include Per Hannevold, Martin James, and Chad Cognata.