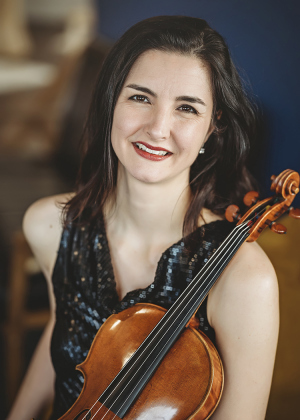 Daphne Gerling enjoys an international career teaching, performing, and writing about the viola. From Holland to Portugal, and New Zealand to Honduras, Daphne’s travels and performances have taken her to 30 universities around the United States, and to 15 countries overseas. In recent years she has been a summer fellow at Lincoln Center Education in New York and enjoyed performing on Baroque viola with the Washington Bach Consort, Karlsruhe Handel Festspiele, and the American Baroque Opera Company. She has participated in commissioning projects with composers Libby Larsen and Jorge Variego, leading to American premieres in Tennessee, Georgia, Los Angeles, and in Rome and Cremona, Italy. As a concerto soloist she has performed works by Clarke, Mozart, Hindemith, and Weber in Texas, Brazil, and at the storied Saigon Opera House in Vietnam. As a chamber player, she has appeared with Dallas’ Chamber Music International and Art Music series, as well as Sounds Modern in Fort Worth. In summer 2022 she used her Avaloch Farms Music Institute residency to develop her recording project featuring works by female composers who may have participated in the 1919 Coolidge Competition. EnciRCling, her debut album with pianist Tomoko Kashiwagi, will be released in Spring 2023.

She began her research on the 1919 viola works as a visiting scholar at the University of Cambridge faculty of music in 2005. Her dissertation, “Connecting Histories: Identity and Exoticism in the 1919 Viola Works of Ernest Bloch, Rebecca Clarke and Paul Hindemith” (2007) is available digitally through Rice University. Dr. Gerling studied viola, vocal performance, and historical musicology at Oberlin Conservatory, Cleveland Institute of Music and Rice University. She is deeply grateful to have been mentored by viola professors Jeffrey Irvine, Lynne Ramsey, Karen Ritscher and James Dunham, and to have served as their graduate teaching assistant throughout her degrees. She undertook further studies with Heidi Castleman, Thomas Riebl and Simon Rowland-Jones. She completed long-term Suzuki teacher training in Books 1-4 with Teri Einfeldt, and books 5-9 with Elizabeth Stuen-Walker and loves working with pre-college students. Dr. Gerling’s students currently hold teaching and performing positions throughout the United States, Brazil, South Korea and the United Kingdom.

She is currently assistant professor of viola at UNT and secretary of the American Viola Society. Her website is www.daphnegerling.com.