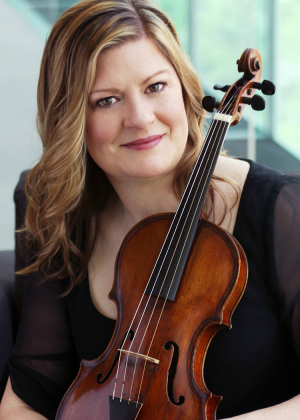 Cynthia Roberts is one of America's leading baroque violinists and has appeared as soloist, leader, and recitalist throughout North America, Europe, and Asia. She has served as concertmaster of the New York Collegium, Apollo's Fire, Concert Royal, and Les Arts Florissants. She performs regularly with the Boston Early Music Festival, Tafelmusik, and American Bach Soloists. She has appeared with the London Classical Players, Taverner Players, Clarion Music Society, and Smithsonian Chamber Players. Her playing was featured on the soundtrack of the film Casanova and she has performed live on the "Late Show with David Letterman." She recently toured South America as concertmaster of the Los Angeles ensemble Musica Angelica with actor John Malkovich in The Infernal Comedy: Confessions of a Serial Killer and appeared as guest soloist and concertmaster with the New World Symphony conducted by Michael Tilson Thomas. Ms. Roberts also teaches at the Juilliard School and the Oberlin Baroque Performance Institute. She has given master classes at Eastman, Cleveland Institute, Cornell, Rutgers, Minsk Conservatory in Belarus, and Jeune Orchestre Atlantique in Santes, France. Her recording credits include Sony, Analekta, BMG/Deutsche Harmonia Mundi, and Eclectra.

At age 12, Ms. Roberts debuted with Chicago's Grant Park Symphony, performing the Mendelssohn Concerto, and three years later appeared as soloist with the Boston Pops. Recent highlights include recordings of sonatas and trios with fortepianist Christoph Hammer, a national broadcast on NPR's "Performance Today" of Bach's Brandenburg Concerto No. 4, a solo performance of Bach's Sonatas for Violin & Violin & Harpsichord at the Mostly Mozart Festival, recordings of the complete Brandenburg Concertos and Monteverdi's Orfeo with Apollo's Fire, chamber music at the Prague Festival and the Boston Early Music Festival. She has made more than fifty recordings on such labels as Sony Classical, BMG/Deutsche Harmonia Mundi and Electra, as well as numerous broadcasts for NPR, CBC and WDR.

Ms. Roberts has been on the faculty at UNT since 2000.