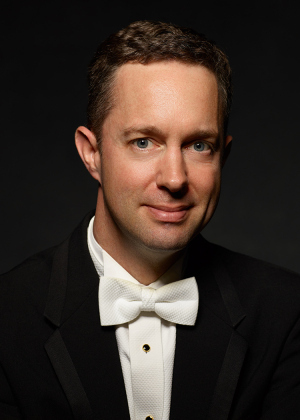 Conductor of the Concert Orchestra

Further highlights include conducting the University of North Texas Symphony Orchestra in concert for an audience of 37,000 at Cowboys Stadium in a major collaboration with the North Texas XLV Super Bowl Host Committee, NFL Films, and Tim McGraw. He has also recorded with the UNT Chamber Orchestra on the Crystal Records label.

In addition to his professional schedule, Maestro Couturiaux regularly serves as a guest conductor/clinician, including concerts with several Texas All-Region Honors Orchestras.

In March 2013 the Northeast Louisiana Arts Council named Maestro Couturiaux the recipient of the Edmund Williamson Artist of the Year Award. The award is presented to an artist who the selection committee feels has made the most significant contribution to the improvement of the quality of life for Northeast Louisiana.

Dr. Couturiaux began his musical studies at the age of eight in violoncello and piano. He holds degrees in both conducting and violoncello performance from the University of North Texas. In addition, he developed his conducting skills at the world-renowned Pierre Monteux School for Conductors and Orchestra Musicians in Maine and at the National Arts Centre Conductors Programme in Ottawa, Canada. The long list of distinguished conductors with whom Couturiaux studied includes Anshel Brusilow, Jorma Panula, Michael Jinbo, Hugh Wolff, Neal Gittleman, Carl Topilow, and Harold Farberman.