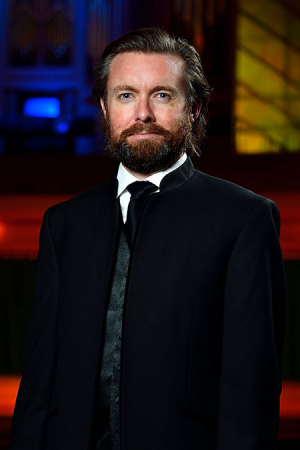 Chair of the Division of Conducting and Ensembles

Conductor of the Wind Orchestra

Andrew Trachsel serves as the Associate Professor of Wind Studies and Chair of the Division of Conducting and Ensembles at the University of North Texas College of Music. He is the conductor of the Wind Orchestra and teaches courses in graduate and undergraduate conducting as well as the history and repertoire of the wind band.

Prior his appointment at the University of North Texas, Trachsel served as Director of Bands and Associate Professor of Conducting at Ohio University for eleven years. He was the conductor of the Wind Symphony, music director for the "Under the Elms" Summer Concert Series, Division Chair of Conducting and Ensembles, and Assistant Director for Recruitment for the School of Music. He taught graduate and undergraduate conducting, band literature, and founded Moving with Meaning: A Conductors Workshop. He was honored with the Ohio University School of Music Distinguished Teaching Award in 2013. Trachsel also taught in the Hugh Hodgson School of Music at the University of Georgia as an assistant director of bands and postdoctoral fellow, and for four years served as a public high school band director in central Iowa.

Under his artistic direction, the Ohio University Wind Symphony performed at the College Band Directors National Association North Central Divisional Conference, the Ohio Music Education Association Annual Conference, and the Southern Ohio Performing Arts Association subscription concert series. As part of an ongoing recording project initiative, the Wind Symphony released three commercial albums on the Mark Masters label, including AMPERSAND (2019), COLOR + LIGHT (2016), and MOTHERSHIP (2013), with multiple appearances on national syndicated radio and the Grammy Entry List. In celebration of the 90th anniversary of the Ohio University Bands, the Wind Symphony, along with the Marching 110, embarked on a European Tour in May 2013, with performances in Ireland and Italy. In February 2017, the Wind Symphony made its debut at New York City’s famed Carnegie Hall, with special guest appearances by the Canadian Brass and Broadway star Denée Benton.

A native of Iowa, Trachsel received a bachelor of music education degree from Drake University, a master of music and doctor of musical arts, both in conducting, from the University of North Texas, where he studied with Eugene Migliaro Corporon and Dennis Fisher.