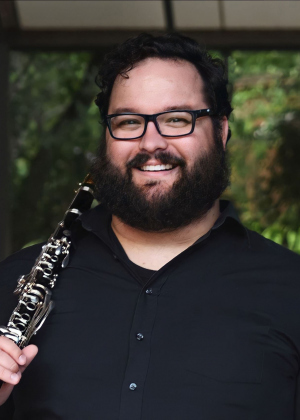 Alexander W. Ravitz is an Undergraduate Academic Counselor at the University of North Texas College of Music. In addition to his appointment at UNT he is a clarinetist based out of Denton, TX. Alexander is currently principal clarinetist with the Venice Symphony (Venice, FL).  As an active freelance musician, Alexander has performed with ensembles including the Naples Philharmonic, The Florida Orchestra and St. Pete Opera. Alexander is also an avid free improviser working with groups such as The Jamison Williams Trio and CRUX in performances and cd recordings of fully improvised music.

As a soloist, Alexander has been a guest recitalist at festivals around the country, most recently at the International Clarinet Association’s New Music Weekend. As a contemporary collaborator, he has worked on many projects with visual artists, and dance companies including Rouge Dance and COBY Dance. As an advocate for new music, Alexander regularly appears in performances ranging from solo clarinet and chamber recitals performing in new-music concerts featuring the music of such composers as Vera Ivanova, Tyler Kline, James Ogburn, David Liptak, Wendy Wan-ki Lee, Ricardo Zohn-Muldoon and Joseph Halmann. Alexander’s most recent commissioning project, liveoak for solo clarinet by Tyler Kline (currently in the process of being recorded), was a consortium he led of over 50 clarinetists and supporters of new music.