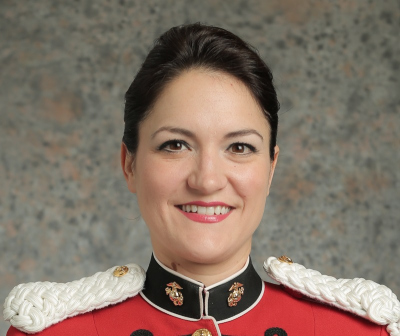 WASHINGTON⎯Gunnery Sgt. Sara Sheffield, a graduate of the University of North Texas will participate in former President George H. W. Bush’s State Funeral as a vocalist with “The President’s Own” United States Marine Chamber Orchestra. The funeral is to be held on Wednesday, Dec. 5, at the Washington National Cathedral.

“We have been fortunate to have had wonderful moments with every President we serve, but President and Mrs. Bush’s gratitude for our Marines and for the special music we provide in The People’s House was especially warm and always engaging,” said Marine Band Director Col. Jason K. Fettig. “He never missed an opportunity to connect with those around him and thank them for their contributions, and the men and women in the band who got to know President Bush both during his administration and in the many years beyond will always remember his ever-present appreciation and admiration for all those who served our nation alongside him.”

For more information, contact the Marine Band Office of Communication at (202) 433-5812 or visit https://www.marineband.marines.mil/presidentbush/.