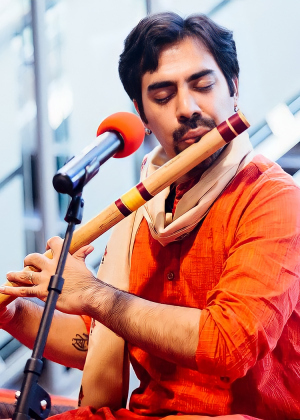 Vivek Virani’s research explores connections between music and spirituality in diverse religious and cultural traditions, with a particular focus on religious music's role in the constructions of community, nation, and self. His current book project, Songs of the Unknowable Country, explores how songs of Kabir and other mystic poet-saints performed by folk musicians are used to negotiate issues of culture, religion, and nation in India and abroad. Vivek is also interested in cross-cultural musical analysis, and particularly in new analytical paradigms for Indian rhythmic composition and improvisation. He developed the World Music Analysis course for graduate-level music theory and ethnomusicology students at UNT, which he has taught since 2017.

The Society for Asian music recognized Vivek with the Martin D. Hatch prize for the best student paper related to Asian music presented at the 2015 meeting of the Society for Ethnomusicology. Recently, he contributed a chapter on altered states of consciousness in classical tabla compositions to the volume Music and Consciousness 2 (Oxford University Press, 2019) and a chapter on caste-discrimination reform through devotional singing to the volume Songs of Social Protest: International Perspectives (Rowman and Littlefield, 2018). An article on performance practice and socioeconomic mobility among rural bhajan singers is forthcoming in the journal Ethnomusicology (Summer 2022).

Vivek is also a versatile performer. He regularly performs interfaith bhajan, kīrtan, Sufiānā and other spiritual songs in a mix of traditional and contemporary styles. He has trained intensively in Hindustani classical tabla under world masters Talayogi Pt. Suresh Talwalkar and Pt. Swapan Chaudhuri, bansurī (bamboo flute) under Radha Prasad, and is adept on many global percussion instruments. He is currently training in Dhrupad vocal under Pt. Uday Bhawalkar. In 2016, he contributed to the soundtrack of the Cannes festival-winning film The Cinema Travelers, in which he played 8 instruments in addition to providing vocals.