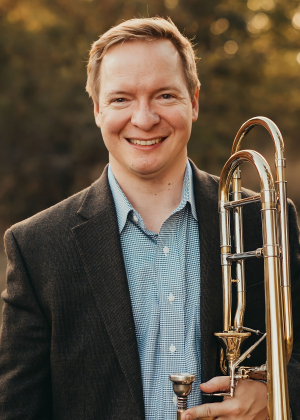 Mr. Menard is an active pedagogue, having presented master classes and solo recitals at universities around the country. He has performed as a guest artist and adjudicated solo competitions at the American Trombone Workshop, presented by the U.S. Army Band in Washington, D.C.  In 2013, Mr. Menard served on the faculty at the Alfredo De Saint Malo Music Festival in Panama City, Panama.   In 2008, he was a finalist for the Lewis van Haney Orchestral Excerpt Competition and winner of the Frank Smith Solo Competition at the International Trombone Festival.

Mr. Menard holds a bachelor of music degree in trombone performance from Northwestern University, and a master of music degree in trombone performance from the San Francisco Conservatory of Music.  His primary teachers have been Michael Mulcahy, Mark Lawrence, and Richard Erb.  Prior to his appointment at the University of North Texas, he served for 5 years on the faculty at Louisiana State University.  His students have enjoyed success as orchestral audition winners, as prominent freelance musicians and arts administrators.