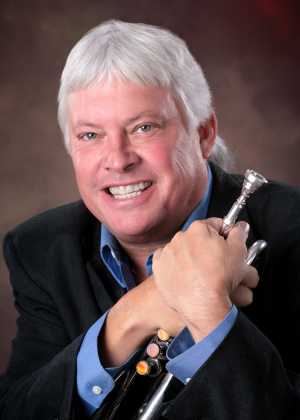 Rodney Booth has been an active professional musician for over 30 years. A native of El Paso, Texas, he began his professional career at age sixteen as a trumpet player in his father’s bands. He received his degree in Jazz Studies at the University of North Texas and was a student of Don "Jake" Jacoby. Rodney was a member of the renowned North Texas State One O’Clock Lab Band.

Rodney is very active in studio and commercial recordings. He can be heard on national commercials for the Fina Corporation, Texaco, McDonald’s Corporation, Domino’s, Miller Brewing Company and Chevrolet. In addition, he performed on the commercial recordings for the Texas Rangers, Boston Red Sox, CNN News, U.S. Postal Service and the popular television series "Wishbone." He also recently recorded the music for a national documentary, "The United States and Mexican War." His various bands have been chosen to perform for companies such as Exxon, Zales Corporation, Gordon’s Jewelers, Merle Norman Company and Cartier’s Jewelers. The Rodney Booth Big Band and his seven piece dance band are in demand for weddings, private and corporate events and award shows throughout the area. Rodney has a full-time lecturer position at the University of North Texas where he teaches improvisation, ear training, and jazz trumpet lessons. In 2009 and 2010 Rodney directed the UNT Jazz Repertory Ensemble.

Rodney’s CD Look Over There features his own jazz quartet; this CD received a very favorable review by music critic Thor Christensen in the Dallas Morning News and can be ordered through Cdbaby.com, iTunes, or Boothmusic.com. His second CD Ten and One features his big band with vocals by Rodney. An exciting duo CD with piano great Bill Lohr was completed in March 2009.