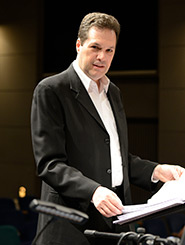 Professor of Jazz Composition and Arranging

Richard DeRosa received a Grammy nomination for Best Instrumental Composition in 2015 for his big band composition “Neil” which is dedicated to Neil Slater, the director of the One O’Clock Lab Band at the University of North Texas from 1981-2008.

In October 2018, Mr. DeRosa was the featured conductor and arranger for the concert productions of Joey Alexander with Strings which premiered at Jazz at Lincoln Center.

In 2012, the WDR Big Band in Cologne, Germany, invited Mr. DeRosa to conduct and present his music in concert. After several other engagements with the prestigious band he served as their chief conductor and musical arranger from 2014-2016. He arranged and conducted the CD/DVD recording My Personal Songbook with the band (2015) which features the music of legendary jazz bassist Ron Carter who is featured with the band. A second CD titled Rediscovered Ellington (2017) features his longtime music partners Garry Dial and Dick Oatts. Together they created unique and modern arrangements of Duke’s rare and unheard tunes. DeRosa's newest CD with the band is Crossing Borders (2019) which features iconic jazz pianist Richie Beirach and his long-time duo partner and violinist Gregor Huebner. Other WDR projects with guest artists include Joshua Redman, Stefon Harris, Kurt Elling, Patti Austin, the New York Voices, Richie Beirach & Gregor Huebner, Ola Onabulé, Ute Lemper, Bill Mays & Marvin Stamm, and Warren Vaché.

Since 2001 Mr. DeRosa has arranged and conducted music for Wynton Marsalis and the Jazz at Lincoln Center Orchestra to feature Toots Thielemans, Annie Ross, Willie Nelson, Norah Jones, Cassandra Wilson, Roberta Gambarini, and Renée Fleming among several other notable artists. He was a prime arranger for a theater project (A Bed and a Chair) featuring the music of Stephen Sondheim as well as an arrangement of The Devil and the Deep Blue Sea for the swing jazz Broadway show After Midnight.  DeRosa was also a featured arranger for the Wynton with Strings concert celebration in 2005.  His most recent project as a featured conductor and arranger for the LCJO was Bernstein at 100 which premiered in November 2017.  Jazz at Lincoln Center commissioned DeRosa to arrange and conduct selected pieces for Joey Alexander and Strings which premiered in October 2018.

Other commissioned arrangements have been recorded by the Mel Lewis, Gerry Mulligan, and Glenn Miller big bands, vocalist Susannah McCorkle, rising trumpet star Dominick Farinacci on his CD Lovers, Tales, and Dances, and acclaimed solo violinist Anne Akiko Meyers on her CD Seasons….Dreams. Mr. DeRosa has also served as co-arranger, orchestrator, and conductor for the critically acclaimed recording projects When Winter Comes featuring guitarist Fred Fried, Dial & Oatts: Brassworks, and a double CD project That Music Always Round Me which DownBeat Magazine selected as one of the top recordings in 2015. Dial & Oatts composed music to fifteen poems by Walt Whitman and brought in DeRosa to create the arrangements for choir to be featured with a jazz chamber group that included Dial on piano, Oatts on saxophones and flute, and guest trumpeter Terell Stafford.

Mr. DeRosa’s compositions for television, film, and theater include background music cues for "Another World," "As the World Turns," "The Guiding Light," commercials for Telex, Bristol-Meyers, and Kodak, various documentaries broadcast on PBS, orchestrations for independent films Gray Matters, Falling For Grace, and Standard Time, and more than twenty original music scores for the national touring U.S. theater company ArtsPower as well as orchestrations for Frankenstein, the Musical. He has also composed scores for videos and hundreds of audiobooks for publishing companies including Bantam Doubleday Dell, Random House, Scholastic, Simon & Schuster, and Prentice-Hall.

Mr. DeRosa is a full professor at the University of North Texas, where he is the director of jazz composition and arranging. His former teaching positions were at William Paterson University, Manhattan School of Music, and The Juilliard School where he taught advanced jazz arranging for studio orchestra. He is the author of Concepts for Improvisation: A Comprehensive Guide for Performing and Teaching (Hal Leonard Publications) and Acoustic and MIDI Orchestration for the Contemporary Composer (Focal Press) co-authored with Dr. Andrea Pejrolo. The latter book has experienced worldwide success having been translated into Chinese in a subsequent edition. An expanded 2nd edition was published in November 2016.

Mr. DeRosa’s publications for public school jazz ensembles are available through Alfred Music (Belwin Jazz), Smart Chart Music, J.W. Pepper, Barnhouse Music, while several of his works for professional bands are available through Sierra Music. All of this music is available through e-Jazz Lines. Mr. DeRosa remains active as an adjudicator and clinician for music festivals and is the artistic director for AJV (American Jazz Venues), an organization created by his late father, noted jazz education pioneer, Clem DeRosa.