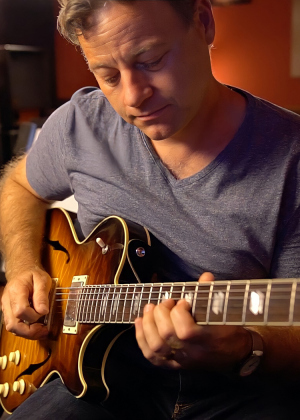 “Aggressive but never forced” describes the music of Noel Johnston to a T. His is a veritable wall of sound across which is graffittied a diagram of fire, sweat, and professionalism. The Dallas area-based guitarist grew up in Southern California, where he began his musical training on violin from an early age before switching to cello at 7. In spite of his keen abilities with a bow, his fingers yearned for a pick. Hip to the fact that his passions as a performer lay elsewhere, Johnston laddered through the garage band toolkit from the bottom up, as it were: starting with drums, moving on to bass, and at last settling on guitar. A life-changing encounter with those six amplified strings came through the iconic work of Eddie Van Halen—so much so that when he plugged in an electric and played a power chord through a distortion pedal for the first time, he knew his fate had been sealed.

Johnston’s talents are as broad as his travels. At age 10, his family uprooted from the Golden State and replanted Down Under. After spending his teens in Australia, he attended college at USC, where teachers encouraged the budding guitarist to get some hardcore jazz under his belt. As an aspiring studio musician, they told him, one had to be a musical chameleon. Johnston took to the challenge like a squirrel to a feeder. An open mind and an insatiable desire to evolve got him into the renowned jazz program at the University of North Texas. Idols Johnston had long admired had passed through its hallowed halls, and it was only natural that he should follow in their finger taps. Of his influences the list is equally varied— Kenny Wheeler, Dann Huff, Pat Metheny, Bill Frisell, Tribal Tech, King’s X, Metallica and Whitesnake.  Each left a pin of conquest on the map of his development.

Although accustomed to a life on the move, Johnston found a home in the Dallas-Fort Worth scene, where he soon became a vital fixture. He has since been featured on over 40 albums—three as a leader, two as a co-leader. He has performed and/or recorded with local and international musicians alike—Dave Liebman, Joe Lovano, Monica Mancini, Adam Nussbaum, Gary Willis, Lucky Peterson, Fred Hammond, and Kenny Wheeler. Of late, he can be seen alongside local jazz icon John Adams and on the Daystar (Christian television network) daily live program “The Marcus & Joni Show.” These and other developments—a regular teaching job at UNT (since fall 2000), marriage, home, and a family—have secured him in the Lone Star State for good. Johnston has been fortunate to bend the pitch of his career to whatever tune suits him. His most recent studio effort, Salted Coffee, is the result of much refinement.