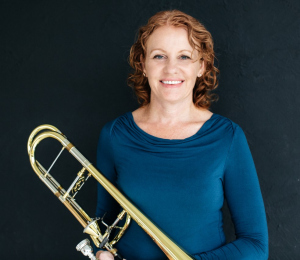 Natalie Mannix is an avid soloist, chamber musician, orchestral performer and educator. In fall of 2016 she began her current position at the University of North Texas after teaching eight years at Towson University in Baltimore and playing principal trombone in the Delaware Symphony for 14 years. Previously, she was a member of the United States Navy Band in Washington, D.C. for over nine years where she performed with the brass quintet and concert and ceremonial bands.

Her recent recordings include a solo album, Breaking Ground: A Celebration of Women Composers, and chamber music CDs: And If All Were Dark with Dave Taylor and the Washington Trombone Ensemble, Mozart Requiem with the Dallas Chamber Choir and Orchestra, the Grammy nominated Interchange: Concertos by Rodrigo and Assad with the Delaware Symphony and the LA Guitar Quartet, and Shadowcatcher: Music for Winds, Brass and Percussion.

Natalie received her degrees from the University of Michigan, The Juilliard School and her doctor of musical arts degree from Catholic University. She is a performing artist for the Edwards Instrument Company.