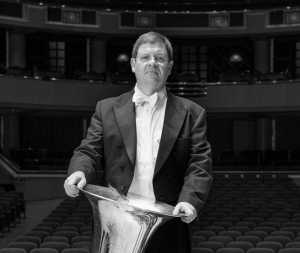 Matthew Good joined the Dallas Symphony as principal tubist in 1995. A native of Big Flats, New York, Good originally was a trumpet player at the age of 14 and switched to the tuba at the request of his band director. While in high school, he studied with Donald Stanley at Mansfield University in Mansfield, PA. He began his college career at The Juilliard School, but was invited to move to Philadelphia to study at the Curtis Institute after his freshman year. While in school, he performed with the Philadelphia Orchestra and the New York Philharmonic and, in 1984, was in the Tanglewood Fellowship program. Good’s mentors include Donald Harry, principal tubist of the Buffalo Philharmonic; Paul Krzywicki, former principal tubist of the Philadelphia Orchestra; and Warren Deck, former principal tubist of the New York Philharmonic. Upon graduation, Good earned the tuba position at the Jacksonville Symphony in Florida where he played for eight years. Since 1996, he has been an adjunct instructor of tuba at Southern Methodist University. In 1997, he performed with the Aspen Festival Orchestra and for many summers at the Brevard Music Center. He resides in Rockwall, Texas with his wife Kathy and their three dogs.