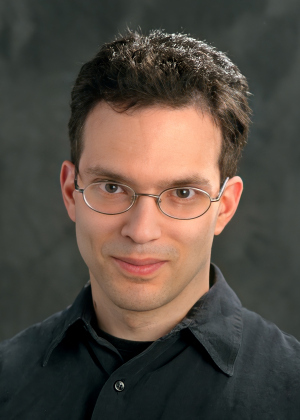 Composer Andrew May is best known for innovative instrumental works with live interactive computer systems, and has created numerous tools for statistical tracking and modeling of musical behaviors. Most of their works, however, explore issues of interaction in an acoustic context, using extensions of notational practice to celebrate the subtle and varied ways performers negotiate time and phrasing in chamber ensembles. This grows from May's life-long engagement as a performer, primarily on the violin (they also play mandolin, guitar, and viola da gamba). They present adventurous new and improvised music on acoustic and electric instruments, in contexts ranging from concert hall to art gallery to night club, including the Dallas-based global fusion group Trio du Sang, which they joined in 2018. Their violin playing has been recorded on CRI and Ravello Records. In addition to composing, coding, performing, and improvising, May is dedicated to presenting new music to new audiences, and is assistant director of the Sounds Modern series, which they cofounded with flutist Elizabeth McNutt in 2011. From 2004-2007 they co-directed the contemporary music series Atomic Clock Music Events in Boulder, Colorado, and they were a founding co-director of the Pendulum New Music series at the University of Colorado. May is associate professor of composition at the University of North Texas College of Music, where they served as the Director of UNT's Center for Experimental Music and Intermedia (CEMI) from 2005-2016 and 2019-2020.