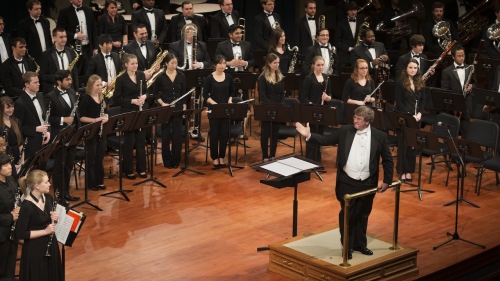 The Wind Orchestra has developed an exemplary national reputation for both their performances and recordings. Membership is drawn from the finest musicians attending the College of Music. The highest quality traditional, mixed with contemporary literature make up the foundation of musical repertoire performed by the group.

The band has performed for such visiting dignitaries as: Her Royal Highness, Queen Elizabeth; His Royal Highness, Charles, Prince of Wales; and Egyptian President Hosni Mubarak. The Wind Orchestra has released six compact disc recordings on the Mark and Eurosound labels. The 2001 CD release by Mark Custom Recordings, Diversions, received Grammy nominations in three categories. The ensemble is dedicated to playing outstanding and challenging works of diverse musical styles while furthering wind music of artistic and historical significance.