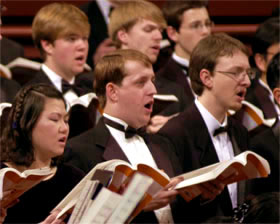 The premier ensemble of the University of North Texas choral program, the 52-voice A Cappella Choir, led by Dr. Allen Hightower, director of choral studies, is selected by competitive audition from among the more than 1,500 music majors within the College of Music.

Founded in 1938 by Wilfred Bain, the choir has enjoyed a rich performance history including a three-month tour of Europe under the sponsorship of the US Department of State in 1966. The choir was featured on the closing concert of the 2005 American Choral Directors Association national convention in Los Angeles and on the 1999 national convention in Chicago, and has made numerous appearances at conventions of the Texas Music Educators Association.