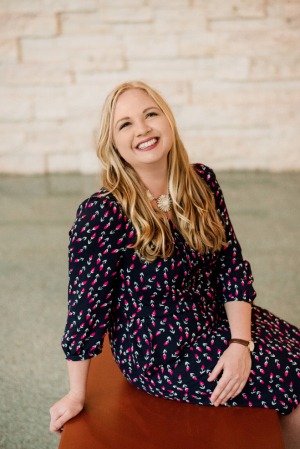 For the past 15 years Megan Heber has used the arts to make the world around her a better place. With extensive experience in business, nonprofits, higher education, and the military, her diverse perspective brings creative solutions to creative people.

In a time when nonprofit organizations are finding it more and more difficult to meet rising financial goals and community needs, Megan has dramatically increased earned and contributed revenue. In just two years, Megan has led CCGD to an unprecedented 30% increase in contributed revenue (including acquiring the organization’s first multi-year major gift), 50% increase in subscription sales, and the second highest enrollment in the organization’s 23-year history.

In August 2020, Megan was selected as the Business Council for the Arts 2020 Obelisk Award Winner as ‘Outstanding Leadership Arts Alumnus’ and in June 2020 was selected as one of 30 Under 40 by her undergraduate alma mater, Rowan University.  In her free time, Megan is the founder and creator of Artspreneurship, a startup consulting firm with the mission of empowering creatives to build sustainable, profitable careers.

Prior to her appointment at CCGD, Megan was Director of Communications, Marketing, and Public Relations for UNT College of Music where she oversaw the planning and development of all promotional materials for one of the largest and most respected comprehensive music schools in the world. Prior to this position, she worked as the Event Coordinator at the UNT Murchison Performing Arts Center where she managed operations for a mixed-use facility including the coordination of 250 events and 700 rehearsals annually.

From 2008-2013, Megan served as a clarinetist in the United States Navy Music Program and was stationed in Virginia, Hawaii, and Louisiana. She performed in the woodwind quintet, wind symphony, and ceremonial band, and was a recipient of the Pacific Fleet Command Sailor of the Quarter award.

In 2016, Megan was one of thirty participants from around the world selected for the League of American Orchestras Essentials of Orchestra Management seminar. She also is a graduate of the 2016-2017 Business Council for the Arts Leadership Arts Institute and the 2017 Disney Institute.

Megan is a member of Sigma Alpha Iota, an international fraternity for women and received the 2008 National Collegiate Leadership Award Winner, Ruby Sword of Honor, and Collegiate Honor Award . She is currently a provisional member of the Junior League of Dallas.