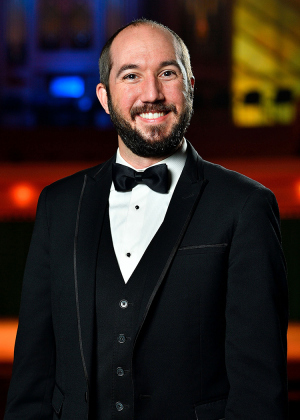 Daniel Cook is currently on the faculty at the University of North Texas where he conducts the Wind Ensemble, teaches courses in wind band literature, graduate and undergraduate conducting and serves as the director of athletic bands. In this capacity, he is proud to lead the 425-member Green Brigade Marching Band and oversee performances at various other university events.

Cook is an in-demand clinician, adjudicator, speaker, and guest conductor. In addition to his work at UNT, he is also the resident conductor for the Dallas Brass Band, the metroplex’s only brass band of its kind. Established in early 2017, the ensemble is rooted in the standard British tradition and performs several concerts a year. His lecture and research interests focus on the adaptation of trends in positive psychology to enhance the efficacy of music classroom instruction. Cook has also participated in prestigious masterclasses, such as the inaugural Reynolds Conducting Institute at the Midwest Clinic, and as a winner/invited conductor for the Young Conductor/Mentor Project sponsored by the National Band Association.

Prior to graduate work, Cook was the Director of Bands at DeLand High School in Florida. Ensembles under his direction consistently received accolades for their performances, notably appearing at the Music for All National Concert Band Festival in Indianapolis and at the Florida Music Educators Association In-Service Conference. During his time in Florida, he was a member of the Florida Bandmasters Association and chaired numerous marching and concert band events. Additionally, he served as staff pianist and organist at Our Lady of Lourdes Catholic Church in Daytona Beach.

An active drum and bugle corps instructor, Cook is currently on staff at the Santa Clara Vanguard as an ensemble specialist. He was previously the assistant brass caption head at the Phantom Regiment Drum and Bugle Corps and prior to that was on the brass instructional team at the Blue Knights. Cook was a marching member of Carolina Crown. His professional affiliations include the Collegiate Band Directors National Association, National Association for Music Education, National Band Association, Kappa Kappa Psi and Phi Mu Alpha Sinfonia.