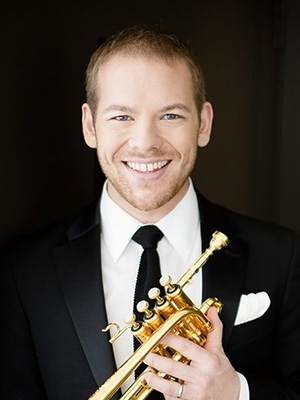 Interim Director of the Center for Chamber Music Studies

Caleb Hudson is assistant professor of trumpet at University of North Texas. He is the newest member of the Canadian Brass, having graduated from the Juilliard School with both a bachelor and master of music degree. Acclaimed by the New York Times as 'brilliantly stylish," Caleb made his solo debut with the Chamber Music Society of Lincoln Center performing Bach's Brandenburg Concerto No. 2.

Caleb has performed as a soloist around the world, most recently with the Israel Philharmonic in Tel Aviv. Possessing a wide range of musical styles, his experience ranges from soloing in Carnegie Hall to appearing with rock band Vampire Weekend on "Jimmy Kimmel Live." Other recent solo engagements include the Santa Fe Chamber Music Festival, Yellow Barn Festival, University of Georgia Wind Ensemble, University of Scranton, and a solo recital at the University of Georgia that was broadcast nationally on NPR's "Performance Today."

In addition to performing in Canadian Brass all year for thousands of fans around the world, Caleb has a passion for writing music, especially for the group. His arrangements and compositions have been published and featured on two albums, Canadian Brass: Perfect Landing and Canadian Brass: Great Wall of China. In 2015, his original composition White Rose Elegy was performed as a world premiere in Lincoln Center by the Canadian Brass and New York Philharmonic Principal Brass and Percussion.

Caleb was previously the trumpet professor at Colorado State University, where he was devoted to teaching and sharing his love for music with students.

As part of an exclusive agreement between the Conn-Selmer Corporation and Canadian Brass, Caleb performs on 24-karat gold-plated Bach trumpets.