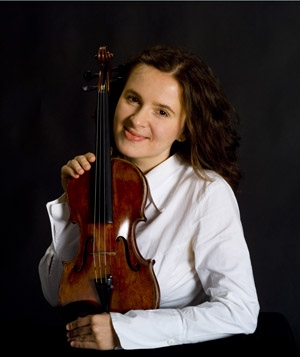 Ania’s career started early when at 8 years of age she soloed with the Greater Poland Symphony Orchestra performing Wieniawski’s Polish Folk Dances. At age 13, she performed Saint-Saëns' Violin Concerto with the Eindhoven Filharmonic (Holland) and a Wieniawski caprice for two violins with her sister at Mirror Hall of the Concertgebouw in Amsterdam.

Born in Poznan, Poland, Ania Bard, began her musical education at the M. Karłowicz and H. Wieniawski Elementary and Secondary Music Schools in Poznan with Mieczysław Wierszczycki. At 14, she entered the Maastricht Conservatory of Music in Holland where she studied with Robert Szreder, eventually earning her high school diploma at age 16 from the School for Talented Youth in Poznan, in the class of Wojciech Gielnik. Thereafter, Ms. Bard became a full scholarship recipient at the University of Kansas earning the bachelor of music degree in violin performance with Ben Sayevich in 1997 and subsequently she became a full scholarship recipient at the New England Conservatory of Music in Boston earning the master of music degree under Eric Rosenblith in 1999. Following her graduation, Ms. Bard continued to take private lessons with Roman Totenberg.

While a student in Kansas and Boston, Ms. Bard participated in the Yellow Barn Music Festival and Kneisel Hall Chamber Music School and Festival in Vermont and International Musical Arts Institute in Fryeburg, Maine.

In 2006, Bard was invited to perform as a visiting artist at the University of North Texas in Denton. Subsequently, she was offered an outstanding achievement award to pursue the doctor of musical arts degree there and to be a teaching assistant to professor Julia Bushkova. In 2008 Bard was offered a contract to serve as the concertmaster of Orquesta Filarmonica de Teatro Municipal de Santiago in Chile. Upon returning to Denton in 2009, she earned the doctor of musical arts degree in violin performance with a minor in ethnomusicology in 2014.

Since moving to the Dallas/Fort Worth metroplex, Bard has joined the Plano and Irving symphony orchestras becoming their concertmaster in 2010, and the Dallas Opera Orchestra as an associate musician. She has also studied to become a baroque violinist at UNT with Cynthia Roberts and performed for five seasons with the Orchestra of New Spain. Currently, Bard is a member of Texas Camerata - a nationally known baroque ensemble. Between 2010-2015, Bard was a private instructor at Dallas Strings in Allen and between 2013-2015 she served as an upper strings coach for the Dallas Asian-American Youth Symphony. In the summers of 2010 and 2011, Bard taught at the International Chamber Music Festival in Positano, Italy. In 2015, she performed as a baroque and classical violinist at the Vietnamese-American Music Festival in Vietnam and, in 2016, in Paris, France. Since 2013, Bard has served as an adjunct professor of violin at Texas Woman’s University.

Bard has been an avid propagator of musical education for children, youth and adults who are underprivileged and do not have access to musical education in their immediate environment. She has been involved in outreach programs as a recitalist and lecturer in Chile, Israel and the United States.

Bard comes from a musical family. Her mother was a professional violinist, choral conductor, and music critic and her father was a trumpet professor and performer. To this day, both parents continue to be active as music educators. While growing up, Ania Bard performed solo and with her sisters (a violinist and a pianist) in Austria, Holland, Poland and Sweden.

In 2013, Bard married Dr. David Schwarz, an author, scholar and music theory professor at the University of North Texas.

In Fall 2017, Bard-Schwarz pursued her ongoing interests in music and neurology at the University of Texas Southwestern in Dallas.

In her spare time, Bard-Schwarz enjoys healthy cooking with her husband, growing an herb, vegetable, and flower garden, drawing and photography. She practices yoga meditation and enjoys the outdoors, walking, hiking, bird watching and horseback riding.